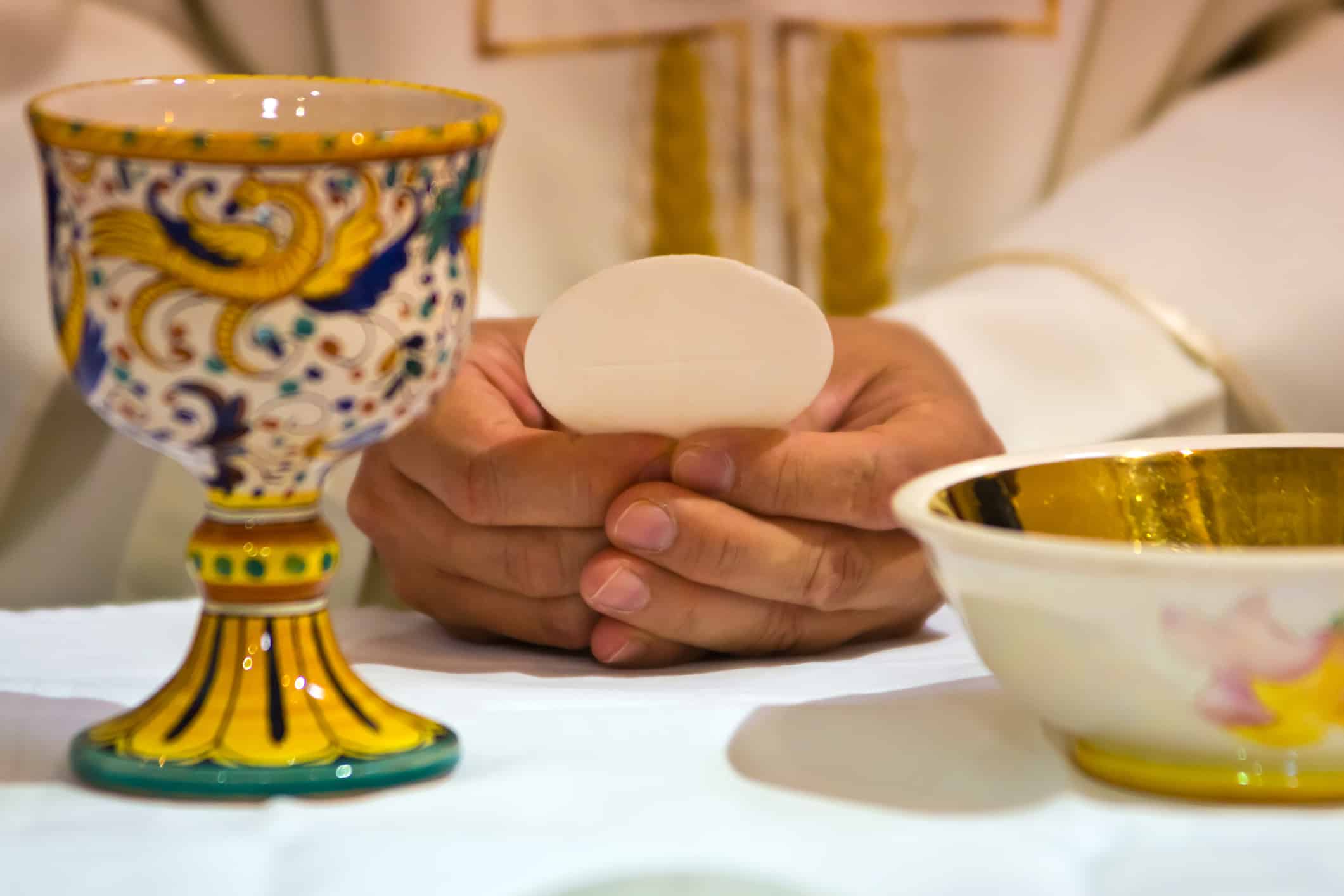 “At the Last Supper, on the night he was betrayed, our Savior instituted the Eucharistic Sacrifice of his Body and Blood. He did this in order to perpetuate the sacrifice of the cross throughout the centuries until he should come again, and so to entrust to his beloved spouse, the Church, a memorial of his death and resurrection: a sacrament of love, a sign of unity, a bond of charity, a paschal banquet in which Christ is consumed, the mind is filled with grace, and a pledge of future glory is given to us”

What is the Mass?

The Mass is the Catholic liturgy in which the sacrament of the Eucharist is embedded when bread and wine are transformed into the body and blood of our Savior. The Mass is a sacrifice, but is not a re-crucifixion of Christ; there is no sacrifice worthy of the name except the one sacrifice that Jesus offered on the cross. Rather, all the efficacy of the Mass comes from that singular sacrifice of Christ. What the Mass does is to, not just symbolically represent that sacrifice, but to make it present once again to His Church. It is one means in which the fruits of Christ’s death upon the cross are applied to individual human souls.

What is the Eucharist?

The Mass is one single act of worship but consists of different elements. In the Roman rite, used by most of the Church, the Mass is divided into four main parts, each of which gathers the prayers and presence of the faithful for a particular purpose. This is called the Order of the Mass, and its main parts, in order, are the Introductory Rites, the Liturgy of the Word, the Liturgy of the Eucharist, and the Concluding Rites.

Why do we attend Mass?

The Ten Commandments, were the laws and moral code handed down by God. The Third Commandment to “Remember to keep holy the Sabbath day,” is one that was and is a sacred responsibility for any devout Jew. It represents a reminder of God’s saving actions on behalf of the Jewish people.

Christians transferred the Sabbath responsibility to Sunday, which was the day of Jesus Christ’s resurrection from the dead. But, as with the Jews, our keeping holy the Lord’s day is a reminder of the saving actions of God, in the person of his son, that redeemed us.

From the very beginning of the Church, Christians believed that being a Christian was a communal matter. We are called to a personal relationship with God, but we are also called to be Christians together, in community. We Catholics see the Mass on Sunday to be our principal act of communal worship in which we both remember the sacrifice of Christ and celebrate the freedom that that sacrifice gained for us.

What if we can’t attend mass?

Attending Mass on Sunday and holy days of obligation  is not always possible for all members of the community. Some people have been hospitalized, home-bound, or imprisoned and do not have the opportunity to be physically present with a regular worshiping community. While a televised Mass is never a substitute for the Sunday Mass celebrated within a parish faith community, it can still bring the Lord’s healing and comfort to those who cannot physically participate. Some links to televised Sunday masses are included below:

Also, links to the following masses (streaming and recorded) are available at http://www.catholictv.org/shows/santa-misa